For many years, trenching has been the standard solution when underground utility lines are installed. However, over the years, it has proven to have a number of serious disadvantages.

The most obvious ones are the safety hazards it poses to workers. Many workers have met accidents at excavation sites. Workers have fallen into the trench, been trapped as materials or equipment collapse onto the trench, or have come into contact with hazardous elements such as polluted water or electricity.

But there are also concerns on the project management side of things. Traditional trenching or open cut drilling generally takes longer to finish. It also causes much disturbance to the ground and surrounding environment, which of course requires extensive repair. Plus, staff and the project itself are always more vulnerable to weather and other environmental conditions. 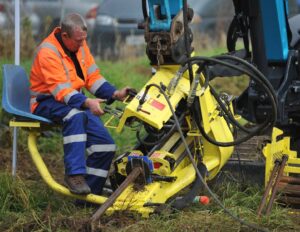 What is horizontal directional drilling?

Commonly abbreviated as HDD but also known as directional boring, this is a pipeline installation method that bores a hole underground without causing disturbance on the surface. The three stages of HDD are:

On the first stage, a pilot hole is bored. The drill bit that is connected to the drill rods penetrates the soil, and it pushes until it reaches the other end of the boring project’s determined borehole length, also called the exit pit.

The drill pipe releases drill fluids which serves as the drill bit’s guide as it moves through the soil. Drill fluids serve as a stoil stabiliser and a lubricant to make for easy passage. They also carry soil cuttings out of the borehole and back to the drill rig to ensure the bore path is bored clean. An HDD location system is used to determine the exact location of the drill bit.

In this step, the pilot borehole is enlarged to a size that can safely accommodate the pipe that’s to be installed. When the drill bit arrives at the exit pit, reaming tools (larger than the drill bit) are attached to the drill bit, and the drill stem is then pulled back until the drill bit returns to the entry point. The HDD location system is again used to locate the drill bit. The result is a hole that is wider in diameter.

Drilling mixtures usually containing bentonite create a cake layer around the pilot hole to ensure a stable hole. Other additives such as polymers are used to further break up the soil, and other mixtures will clear blockages in the borehole as well.

At this stage, the product pipe is pulled into the drill hole until it is fully fitted into the bored path. Sections of the pipe are welded together to produce the entire pipe string. Drill rods and reamer are essential in ensuring the drill string properly transfers to the product pipe. Again, fluids are used to lubricate the borehole as the product pipe moves along the hole.

As soon as the pipe fully fills out the length of the hole, the drill string and other horizontal directional drilling materials are removed from the pipe. Finally, the surface around the pilot hole and exit pipe are repaired to their previous condition.

When utility lines need to be installed underneath areas like highways or rivers, HDD is the solution. With HDD, there is no open cutting involved. This means that when a pipe is installed underneath a river, for example, the pipe can go directly under the surface of the riverbed, causing no disturbance to the environment. Highways can also stay open and busy while necessary pipeline construction is underway.

This benefit is directly related to the previous one listed above. When pipes are installed the traditional way, they can be exposed to elements that cause them to degrade faster. For example, traditional drilling methods recommend pipes run under bridges, which then exposes them to sunlight, rain, and other environmental elements. This cuts the lifespan of pipes by more than half. HDD allows for a pipe to be installed underground with no hassle; placing it underground is what preserves a pipe’s quality.

One might think that because horizontal directional drilling’s technology and technique is more sophisticated that it should cost more. It would surprise you that it actually costs much less. An HDD project is completed much earlier than traditional open cut drilling; saving time means saving money. On top of that, the technique requires fewer equipment as well as personnel. All of this totals into much lower overall cost.

Better for oil and gas extraction

HDD makes it possible to extract valuable resources without properties or natural resources aboveground having to become collateral damage. HDD increases exposure to a reservoir anyway, as lines can be designed and targeted to allow for higher levels of production. HDD pipes may even be curved at certain angles to achieve optimum production.

Better for the environment

HDD is the more environmentally sustainable solution. Instead of breaking the ground apart to expose soil to the surface, HDD moves soil to the side to create the borehole. This means that it is much less likely for soil contamination to spread towards the upper layer of the soil or the ground, and there is much less risk for hazardous elements to be exposed. This also means that it will not ruin landscaping or any existing features aboveground.

JB Trenchless is your one-stop shop for all your HDD needs, from high-power drilling machines to drill rods, drill fluids, HDD location system, and many more. As your local specialists in the trenchless industry, you can count on us to help you commit to the trenchless technique.

Explore our website to learn more about our products and services. For enquiries, reach us through the following channels:

You may also leave us a message via our online enquiry form.